This is the most stripped-down view in Panerai’s current collection and additionally, it signifies the entry level price into the world of Panerai in-house movements. It’s actually a rather new motion — that the caliber P.5000 was released just a couple of years back back in 2013, HODINKEE founder Ben Clymer have a peek at the watch in which it was introduced: the PAM 510, which has a seconds sub-dial in the 9:00 position. The PAM 560 is newer than the movement — we saw it for the first time in the 2014 edition of the SIHH, and the impression we have is that it’s a part of an overall move throughout the board to produce all Panerai watches powered by at-home movements. We haven’t spent a tremendous quantity of time together with Panerais really on the wrist at HODINKEE, however the company’s increasing reliance on Panerai-made moves made us curious to find out what kind of an impression that the PAM 560 makes in person.It is not the largest Panerai (after all, there’s the 52 mm Mare Nostrum) at 44 mm in diameter. It’s water resistant to 300 meters, and there’s sapphire front and rear so you can watch caliber P.5000 in the office. The very thick strap is kept in place by screwed-in bars and the buckle is very much a no-nonsense affair, with a curved, wide pin that just happens to replicate the shape of the lever which holds the crown set up (whether intentional, or serendipitous, it is a really wonderful touch). That mix crown-guard/locking system, in addition to the utterly uncluttered “sandwich” dial, is what makes the Luminor instantly identifiable.

With the new Luminor 1950 3 Days Automatic PAM 722 and PAM 723, Panerai returns to the design of its very first steel bracelet that debuted in 1999, featuring links that trace the semicircular form of the Luminor crown bridge.

Like the watch case the new bracelet is made of 316L stainless steel, the most common steel alloy in watchmaking. While the design evokes the first generation bracelet, it’s been significantly simplified (eliminating the screws on the back required to hold the links together), while becoming slimmer to fit the thinner watch case. Each link of the new bracelet is made up of three pieces, held together by a single lateral screw. 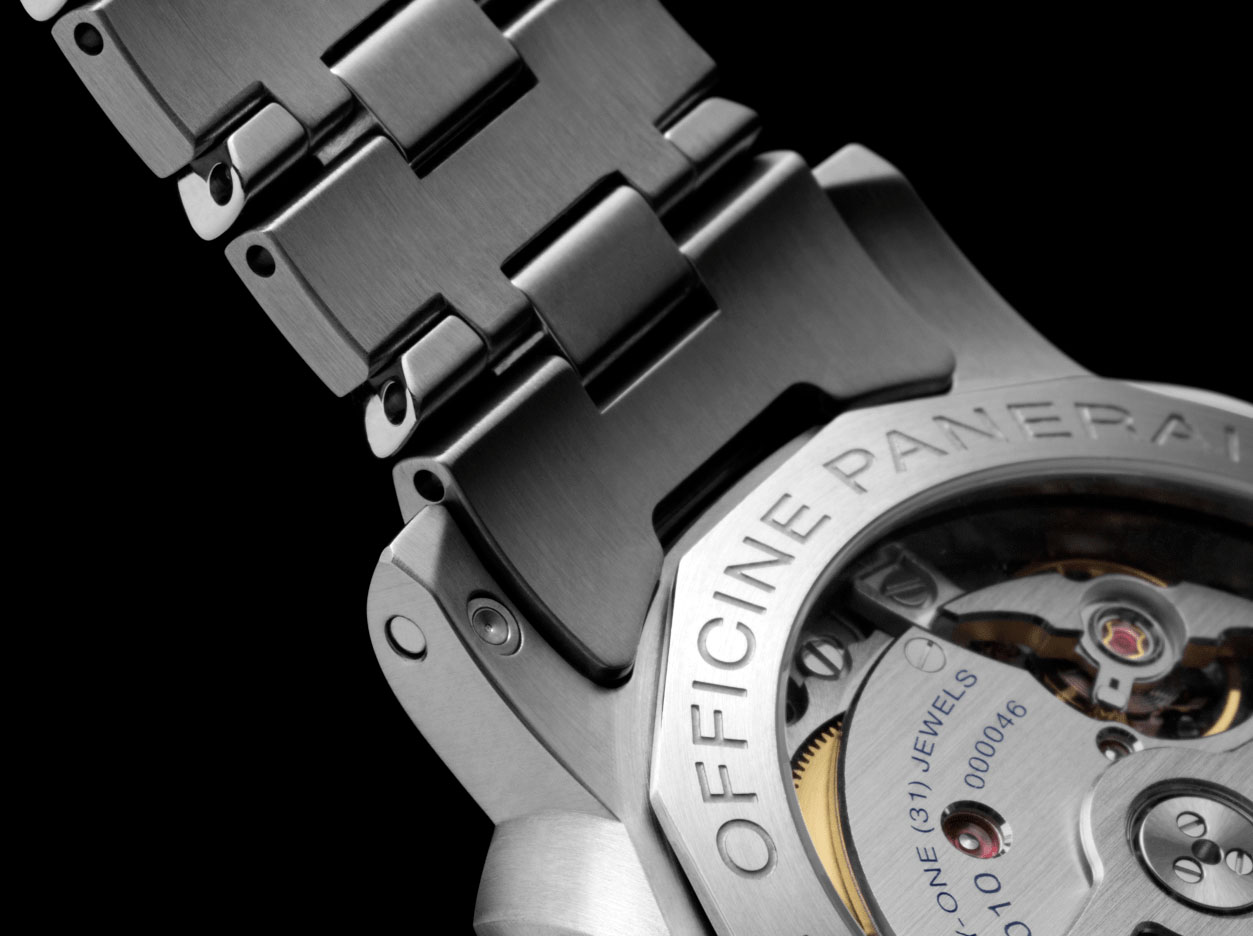 While the restyled bracelet is being introduced on the two new models – PAM 722 and PAM 723 – it is available separately and will fit any Luminor 1950 watch equipped with the P.9010 movement. 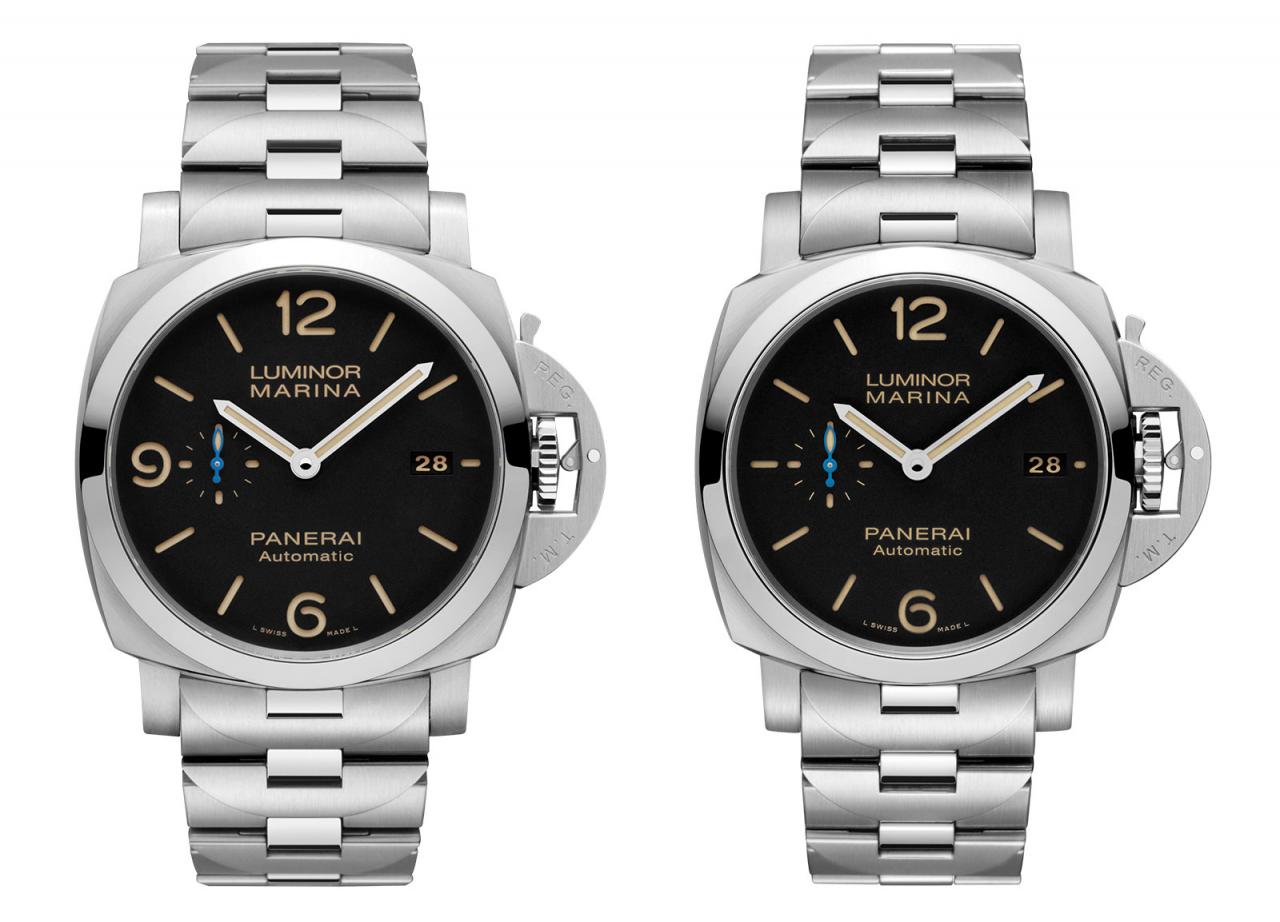 The Luminor Marina 1950 3 Days Automatic (PAM00722) is the smaller of the pair, with a 42mm steel case. The dial adopts the colours recently favoured by Panerai – namely faux vintage, ecru-tone Super-Luminova on the dial and hands with a pale blue accent in the form of the sub-seconds hand. 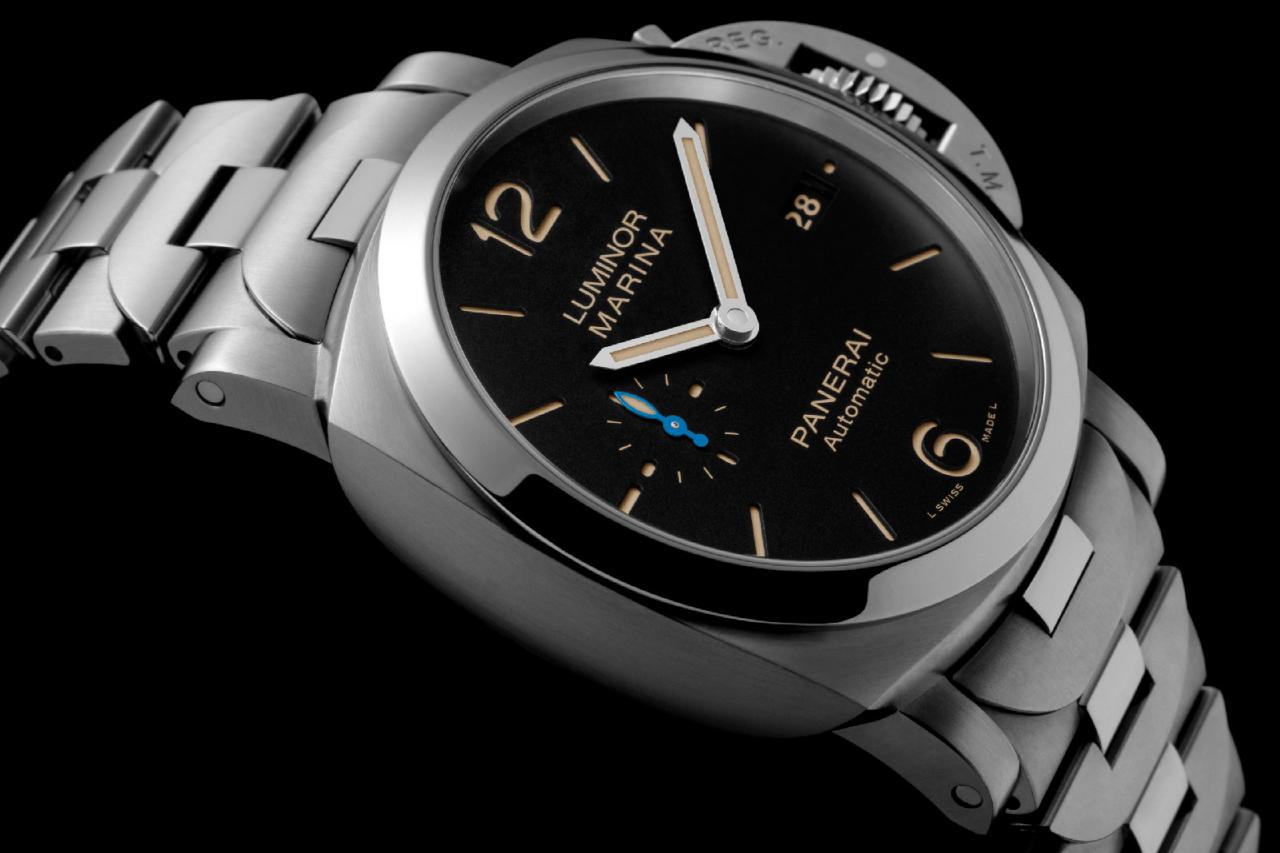 Inside is the P.9010, the second generation of Panerai’s basic in-house automatic that was unveiled last year. It’s a thin movement 6mm high, with a three-day power reserve and an independently adjustable hour hand for easy setting when travelling. 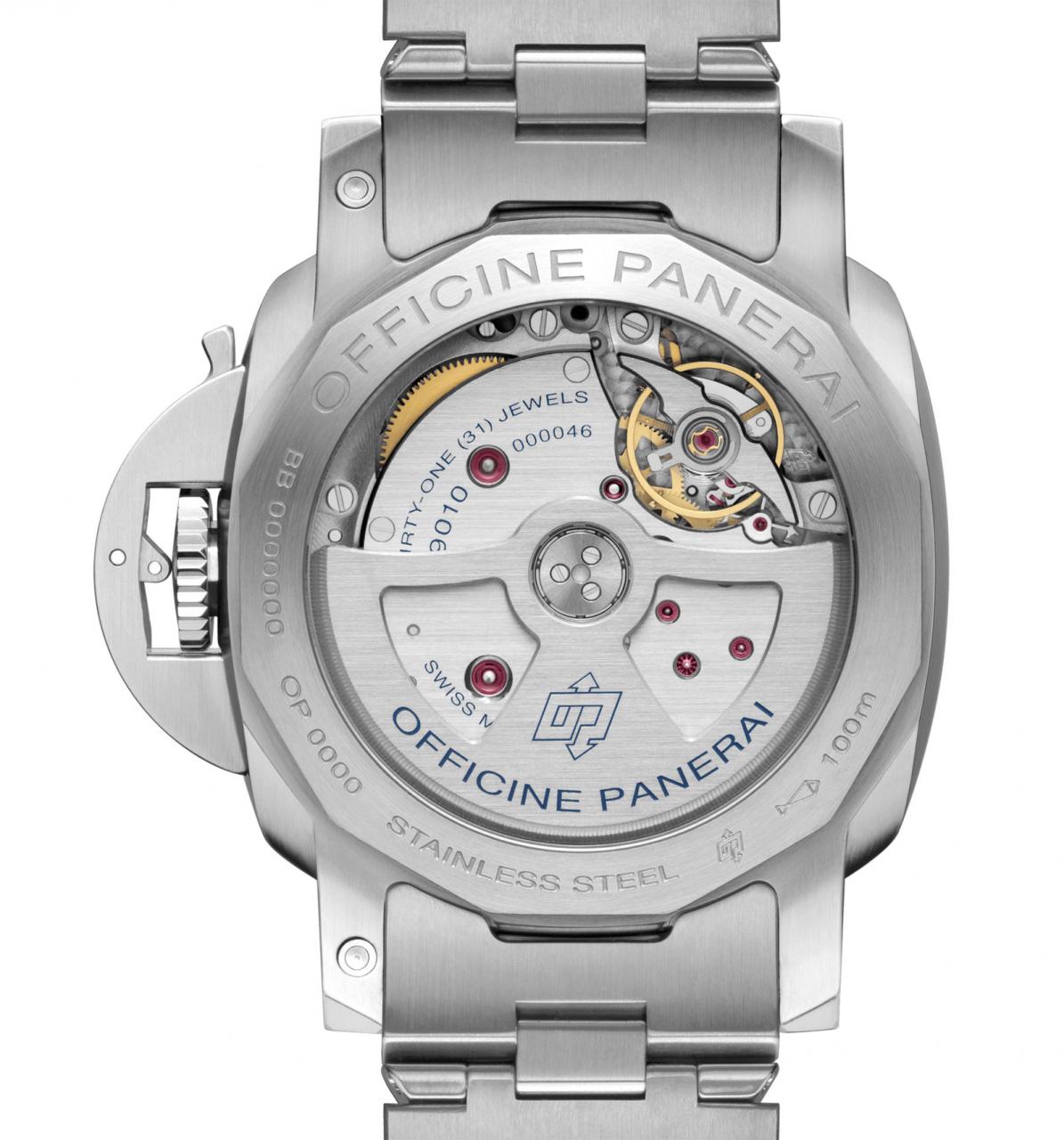 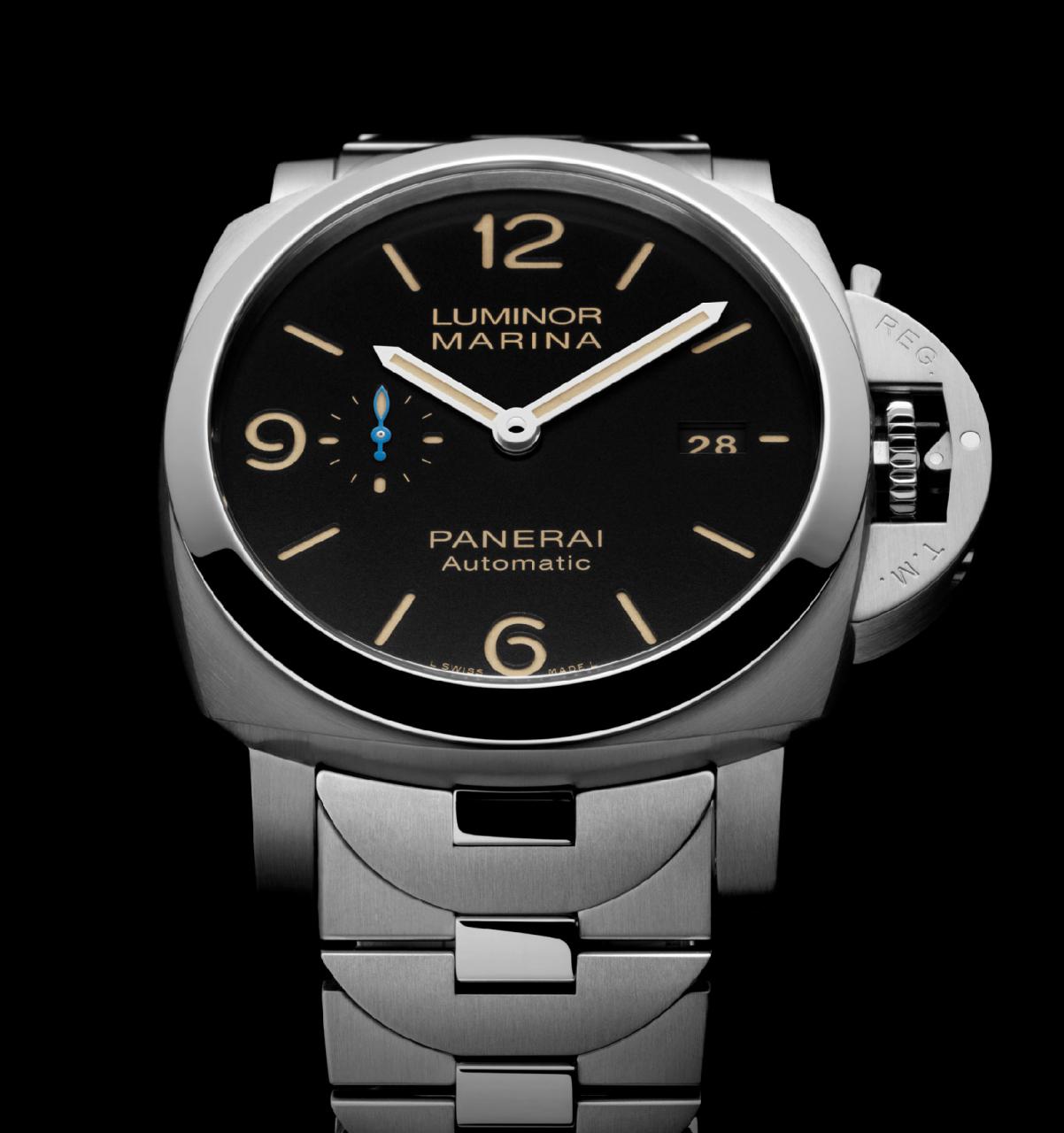 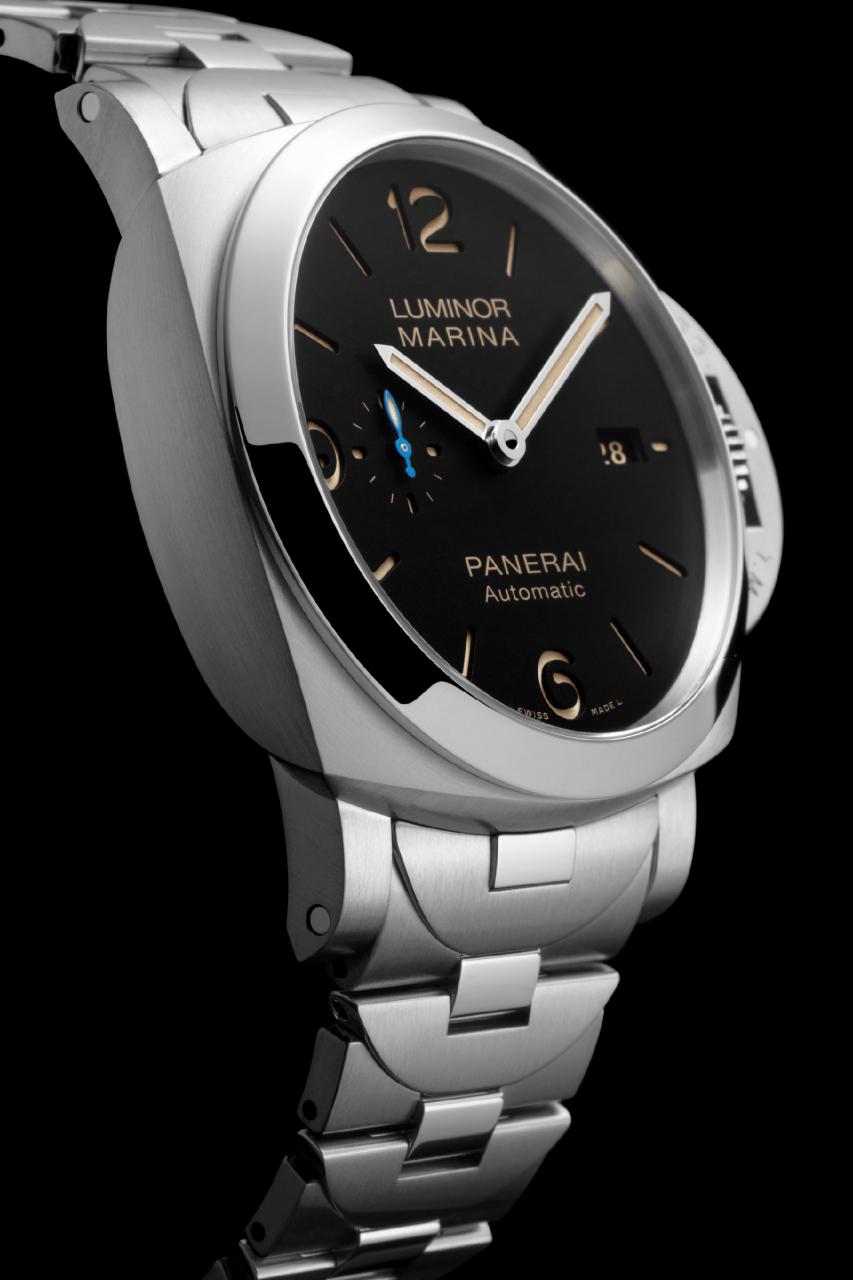